Last week, NBC premiered it’s new music competition series, American Song Contest. The series, which is based on the hugely successful Eurovision Song Contest, features live music performances from across America, representing all fifty states, as well as five U.S. territories and the nation’s capital. In the end, the best hit song will be chosen from a solo artist or group.

On last week’s episode, eleven contestants each performed a song, and Monday night on the show it was announced that three contestants, in addition to Rhode Island’s Hueston, who had already advanced into the semi-finals, would be moving on to the next round of the competition, including Michael Bolton, who is representing Connecticut.

On Monday night, the Grammy Award-winning singer talked to the press during a roundtable interview about performing his song “Beautiful World” on the series and moving on. 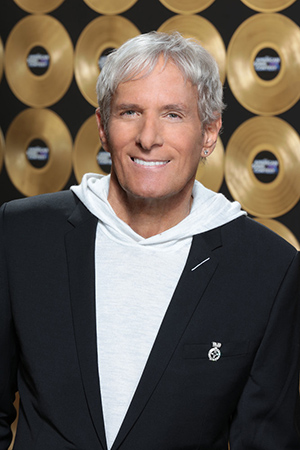 Having already sold more than sixty-five million records world-wide, Jamie Ruby of SciFi Vision asked the artist if there are still new things to learn from performing on a competition series like American Song Contest. “I'm always learning,” said Bolton. “While I'm singing, I'm learning about what I can do with my voice to have the kind of effect that I want from it. It's kind of an ongoing conversation between me and my vocal cords of whether it's going to behave or not, to hit the notes that I want, the way I want to express myself. I think that the learning process of living is what can feed your next album or your next song that you're about to write [and] can give you a perspective that you never have had, even in all the many, many years I have been in the business writing. The learning process means it's kind of an infinite door that you walk through, and as songwriters, there are only so many important things in life that you can write about. The single most important thing in life you can write about is love. It's going to be what matters; it's going to be the people who matter to you in your life. It's going to be your family, your loved ones, your children. It's going to be romantic love. But that's going to definitely be more powerful and be the the lesson we are left with in our lives. The thing with songwriting is that you want to say that same, most important thing in a new way. You want to say whatever it is about your experience of love, whether you found it, whether you have it, whether you're still looking. You just want to do it with different words. You want to find a different way. That becomes a challenge and a crest that songwriters get together and enjoy. Enjoy the challenge, basically.”

Be sure to watch our interview with Michael Bolton below, and stay tuned for more coverage on American Song Contest.
Twitter
BotonSocial por: SocialEmpresa
Category: Interviews