Exclusive: The Walking Dead’s Paola Lázaro on Princess and Mercer Tearing Each Other’s Walls Down

On tonight’s all-new episode of The Walking Dead, Princess, played by Paola Lázaro, gets closer to Mercer (Michael James Shaw) and gets him to open up. “I think they tear each other’s walls down,” Lázaro told SciFi Vision during a recent exclusive interview. “They disarm each other, and I think that's how they connect, and I love that.”

“Princess has always seen more to Mercer than what lies behind his armor, which is a very vulnerable and beautiful human being,” added the actress, saying that Mercer sees what’s behind Princess’s comedic behavior as well. “He sees a really interesting, vulnerable woman that he's actually interested in getting to know more.”

The actress went on to talk about how Princess doesn’t question it when Mercer admits killing the soldiers and covering it up. “I think Princess is such a loyal character,” said Lázaro, “and she would do anything for her friends, if she knows they're good people. I think at this point, she knows that he's a good person. So, she's willing to sit down with him and go through the logistics of why this event happened…She's a very tough woman, too, so she's ready to sit down and hear the nitty gritty of what happened and willing to support him if she believes that it was warranted.” 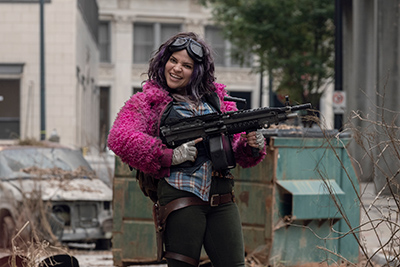 Lázaro had only positive things to say about working with Shaw. “Working with Michael is an absolute dream,” said the actress. “I could not imagine someone better to go on this journey with than Michael James Shaw.”

For more from Lázaro on Princess and Mercer’s relationship, how she feels about working with walkers, how The Walking Dead has changed her life, and much more, read the full transcript below, and stay tuned for our exclusive with Michael James Shaw.


SCIFI VISION:  When we first meet Princess, she's obviously not very social. She's not used to being around people, and she's a very different person. Can you talk about her journey and how she's changed?

PAOLA LÁZARO:   I think Princess has always wanted to belong and to feel safe in a place and to feel, again, like she belongs somewhere. I think finally she finds these friends who actually love her and care for her, and I think she starts letting her guard down, and her guard and her defense mechanism is her comedy and her wild behavior. I think, finally, she can like be like, “I don't have to do that anymore. I can just be me.” And yes, she's always going to have her wild side, obviously, but I think she's really trying to kind of like fit into a community without obviously losing herself, but I think she's growing up in front of our eyes is what I'm what I'm seeing.

What do you think it is about Mercer that she connects to so easy?

I think Princess and Mercer can take down their walls in front of each other, and that is something very hard to do in the apocalypse. Princess has always seen more to Mercer than what lies behind his armor, which is a very vulnerable and beautiful human being.

And in terms of Mercer, what he sees in princess is that he sees beyond her comedic behavior and her wild behavior, and he sees a really interesting, vulnerable woman that he's actually interested in getting to know more. 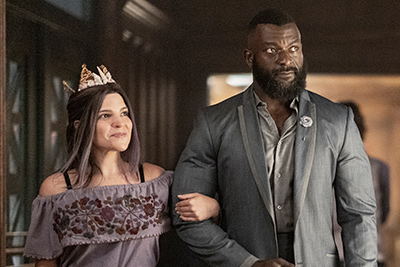 I think they tear each other's walls down. They disarm each other, and I think that's how they connect, and I love that.

This connects with that, but I was going to ask you why is it she was able to get him to open up? Maybe you can expand a little bit?

I think her honesty and her loyalty to him and her saying, “I'm here for you, no matter what” is what disarms him and is able to make him speak and tell his truth in what he's going through. I think when you find someone who you can just be yourself in front of, with all the darkness or the light, all of it, I think that's what he finds in her, a confidant, and not only that, but a romantic partner. It's all wrapped up into one person. I think that's why they're able to talk about these things.

When he says he’s killed these people, she doesn't question it. She just completely trusts him. Do you think that she's kind of in the back of her mind thinking about it at all, or does she really just completely believe it was for the right reasons?

I think Princess is such a loyal character, and she would do anything for her friends, if she knows they're good people. I think at this point, she knows that he's a good person. So, she's willing to sit down with him and go through the logistics of why this event happened. What can we do about it? What motivated it? She's a very tough woman, too, so she's ready to sit down and hear the nitty gritty of what happened and willing to support him if she believes that it was warranted.

I do hope we get to see that. Can you talk a bit about working with Michael? 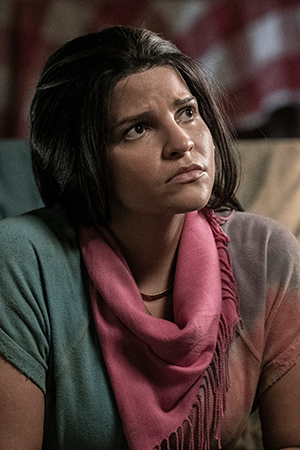 This season, obviously, you're at the Commonwealth and things have changed, but do you kind of miss sort of the the other version of Princess, I guess, and the blood and the dirt?

But she’s ready for action for comes.

How do you feel about being around the walkers? Do they gross you out? I know some people think it's funny just watching them hanging out on set.

I love them. I love them. I was smelling their hair the other day, because it smells really good, because they put some like a mixture of conditioner and water, so it looks greasy, but they smell so good, and I love them. I'm just very excited to be around them, [laughs] and I hug them and stuff. I just get excited when they're around.

How has your life changed since you started working on the show?

So many ways. So many ways. It really has been perhaps the biggest blessing of my life. Everything has changed: how I view myself, my self worth, not because you get followers and stuff like that, but truly, because I've seen how I work under pressure and how I'm still graceful and compassionate and hardworking and responsible. That, to me, was just such a beautiful thing to see of myself, and to recognize my hard work. Just so many things. I've just met so many beautiful people, been able to talk about mental health with people because of the character speaking on it. Just everything has changed.

Were you given anything, or did you take anything from the set?

Absolutely. Goggles, coats. The canvas thing that goes on my seat that says “Princess” and “The Walking Dead.”

Were you a fan of the show before you came on? 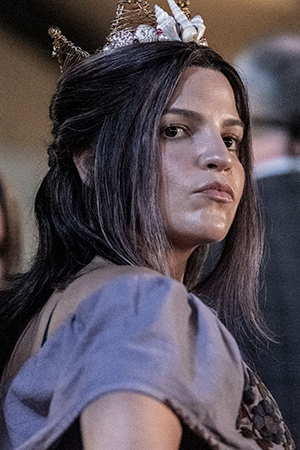 When I first auditioned for it, I had never seen it, because I'm a writer and actor. So, when I'm not writing or acting, I don't watch anything. I'm just with my family and with my friends enjoying that. So, I didn't really watch much TV. When I got the call back, I started binge watching it. For like two weeks, I watched nine seasons, nine and half seasons, and I fell in love with it. I was like, “Oh shit, this is amazing. I really hope I get this.” I just binged it by myself, like no interruptions. Leave me alone. I want to I want to do this. [laughs]

Did you know at the beginning though who your character was, because I know they usually give fake sides?

No. The character's name in the audition sides was Dulcinea, which is Don Quixote’s love interest, and I love Don Quixote. When I read Dulcinea, I was like, “Oh my god, this is amazing.” But I didn't know that it was Princess. I had no idea. Oh, wow, that gets me emotional just thinking about that. Man, it has been the biggest ride of my life so far, the show.

Obviously, now the show's going to be over, but you never know; you might be on a spin-off. If it were up to you, what would you like to see happen for Princess, if you were writing it? What do you want to see?

I mean, I would love to have a bunch of scenes with Negan (Jeffrey Dean Morgan), just the two of them, going about the world. [laughs] That would be funny. And I love Carol (Melissa McBride), so anything with the two of them, I would be very much up for.

Is there anything at all that you're allowed to tell me about what's coming up that you can tease without spoiling?

All I can say is that it's gearing up; the wheels are moving and turning to an epic final moment, and you can feel it in the episodes…We're gearing towards that epic ending.
Twitter
BotonSocial por: SocialEmpresa
Category: Interviews