Written and directed by Hugh Laurie, Britbox’s Why Didn’t They Ask Evans?, based on the Agatha Christie story, tells the tale of events that unfold after a dying man’s last words to vicar’s son Bobby Jones (Will Poulter) cause him to go on a crime-solving adventure with Lady Frankie Derwent (Lucy Boynton). During their quest, Frankie fakes a car crash on the property of wealthy Englishman Henry Bassington-ffrench (Miles Jupp) and his American wife, Sylvia, played by Amy Nuttall, who recently spoke to SciFi Vision in an exclusive interview about working on the series. The actress hadn’t heard of the story before getting the role but knew right away that she wanted to be a part of the series. “I think I can speak for most actors that if you get a call about being in an Agatha Christie, you want to be involved whatever the part is,” said Nuttall. “Added to this, Hugh Laurie was at the helm! Hugh adapted it, directed, and also starred in it. What else is there to say?”

Being a period piece, the costume was very important to Nuttall when creating the character. “We chose warm colors as it was important that she came across as gentle, warm, approachable, and sometimes fragile,” explained the actress. “How you feel before you even open your mouth on a set is very important. Costumes play a massive part in helping you get in to character.”

For more, be sure to read the full transcript below and watch Why Didn’t They Ask Evans?, now available to stream on Britbox.


SCIFI VISION:   Had you heard about the story before you got the role? 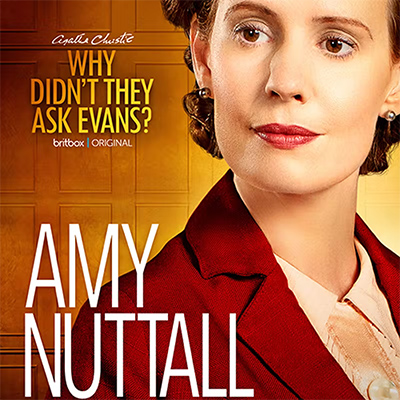 What first attracted you to the role?

I think I can speak for most actors that if you get a call about being in an Agatha Christie, you want to be involved whatever the part is. Added to this, Hugh Laurie was at the helm! Hugh adapted it, directed, and also starred in it. What else is there to say?

Are you a fan of mysteries like this? Are you good at solving them?

I love a good a murder mystery and judging by how many tv series there are in this genre out there, I’d say I’m definitely not alone. You know it’s very well written when you can’t guess who did it.

Other than the script or the original story, where did you draw inspiration for the character from?

Hugh’s writing was so clever and detailed that everything was there for me in the script.

The “keeping it all together” aspect and putting on a brave face I’d say I’m very well practiced at. As a mother in real life, juggling children, work, and the household, I’m sure most people can relate to the struggles of daily life and yet still want to seem like everything is dandy.  Difficult to connect to, I’d probably struggle to bite my lip if my husband was shouting at our son unnecessarily and if he was being humiliating in any way.

How much did the costume inform the character?

Costume is always very important. We chose warm colors as it was important that she came across as gentle, warm, approachable, and sometimes fragile. How you feel before you even open your mouth on a set is very important. Costumes play a massive part in helping you get in to character.

What were some of the overall challenges you had?

I actually don’t remember there being any. We were very well supported by Hugh.

Can you talk about working with Hugh Laurie as a director?

Firstly, being an actor himself is a massive plus, as he totally understands everything from an actors perspective. So, from that perspective alone, he was an actors dream director. He always kept his calm when I’m sure there must’ve been occasions of extreme stress, and he was nothing but a pillar of support to all around him. I remember on my first day asking him to not be polite if ever my American accent slipped, to which he modestly replied, “You’re accent is brilliant…and anyway, what would I know?”  I can confirm that the rumors of him being a total dream to work with are all true.

Can you talk about working with the cast?

The cast were all fabulous and consummate professionals. Giggles were always had when Miles Jupp and Daniel Ings were in the room!

What was your most memorable moment working on the show?

The most memorable moment was probably filming the dining room scenes. It takes a long time to get everyone’s shot, so it’s a long day saying the same lines, and after a while we always get quite giddy. Those days are always fun if you’re with a lovely bunch. That and any moment Hugh gave me a thumbs up!

What in particular do you look for in roles?

If it’s not a particularly big part, then there would have to at least be a couple of good scenes that you can get your teeth in to, in order to want to do it.  I normally can tell straight away if I think I’m right for something, which makes me work all the harder to get it.

Do you have any other projects coming up?

I’m actually about to start something which I’m very excited about. However, I’m not sure I’m allowed to say anything yet, sorry.
Twitter
BotonSocial por: SocialEmpresa
Category: Interviews