SciFi Vision | Interviews | Interview: Going Dark with the Cast of Lifetime's Flowers in the Attic: The Origin

Interview: Going Dark with the Cast of Lifetime's Flowers in the Attic: The Origin

Lifetime’s hotly anticipated Flowers in the Attic: The Origin is here, and fans of VC Andrews’ gothic family saga will love every minute of over-the-top drama! The limited series airs on consecutive Saturdays in July, starting tonight. You can also also catch encore performances Sunday at 10 pm and next Saturday, July 16, at 6 pm, right before the second episode airs. It’s also available on the Lifetime app and mylifetime.com.

Lifetime last brought Andrews’ bestselling Flowers in the Attic to the screen back in 2015. The stylish new series is adapted from the fifth novel, Garden of Shadows, a prequel that tells of bright, optimistic Olivia Winfield’s transformation into the cold, cruel old woman who imprisons her grandchildren in the attic.

In the first episode, Olivia (Jemima Rooper, The Girlfriend Experience), falls for handsome millionaire Malcolm Foxworth (Max Irons, Condor). After they wed, Malcolm reveals his true self and Olivia resigns herself to a lonely, violent life at creepy Foxworth Hall. Things seem to be looking up when Malcolm’s jovial father (Kelsey Grammer, Frasier) shows up with a very young new wife (Alana Bowden, Ride), but the good vibes don’t last. Over four chapters, Olivia encounters increasingly dark secrets (we’re talking obsession, betrayal, sexual assault, incest) and constructs a web of lies to protect her children, her reputation and, most importantly, the massive family fortune. 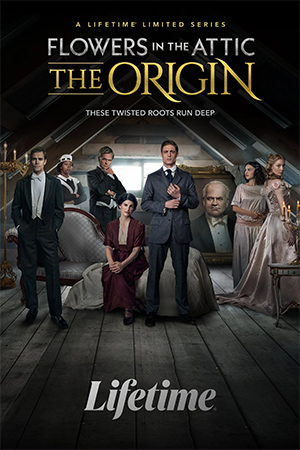 “It's actually the first book that he wrote in the VC catalog, the first of I think over 100 now that he's written,” Sciarotta explained. “It's been a valuable resource to have him on speed dial all the time. I would call him always, I still do, for any questions I might have. If I'm ever unsure about a story point, or something is tonally correct or of the world, I can just check with him…so I was very lucky to have him be a part of the project.”

On set, Rooper carried a heavy workload; as Olivia, she narrates the story and appears in almost every scene. “The amount that Olivia had dialogue-wise and scene-wise, especially at the beginning - it eased up a little as we got into it - was so full on,” she recalled. “I remember just to get one foot in front of the other and to know my lines and turn up on set was what I could manage at the time.” But Rooper didn’t find it burdensome. Instead, she said the intense work “in a way is really liberating and kind of makes it easier, because I very often get stuck in my own head…but such a big undertaking is actually in some ways easier, more freeing, more liberating than sometimes not having so far to go with a character. I find it easier to be further away from myself, I think.”

During the Q&A, Max Irons was asked several times how he prepared to play Malcolm, a truly awful person in ways we won’t spoil here. Even Irons agrees the guy is horrible, but he dug deep into the emotional pain that drives Malcolm’s malice.

“I just had to tune into the child inside of Malcolm,” he explained. “These days there's so much modern therapy available, there's psychology and the way parents work with their children now; these things were unheard of in those days…Malcolm was just left to figure it out. And he didn't figure it out; he didn't do a good job, but he did so in a way that enabled him to survive. That's how I have to look at Malcolm, and out of that way of thinking comes his evil.”

Boden spoke about working with onscreen husband Grammar, who is 40+ years her senior. “I think, for me,” she explained, “it is genuine love between the two of them, so to make sure that was how it was perceived [by] the audiences was really important. [Kelsey’]s fantastic, and he was always making sure I was feeling comfortable, and we worked together to hopefully create something that comes across really genuine.”

All this is familiar territory for Flowers fans, but The Origin is an adaptation, and as such it offers a few twists on the source material. Episode one introduces a new character not included in the novel – Nella (T’Shan Williams, Ninja Express), a maid at Foxworth Hall who forms an early friendship with Olivia in episode one and may know more than she lets on. At a recent press screening, Williams told journalists why she wanted to play Nella.

“Oh, because she's not part of the books!” she exclaimed. “Paul really gave me the reins to build on her from the ground up, and I got to implement her story where it wasn't there before. So, I got to bring this completely fresh character to such a huge franchise…and I thought her character was really interesting and layered and quite exciting and important as well to the story. [She’s] the moral compass of the story for a lot of the episodes.”