Being a period piece, Becoming Elizabeth has gorgeous and elaborate costumes, which really informs their characters, according to Garai. “The great thing about this period is that there are sort of certain things that the costumes really teach you, like, you can't dress yourself,” the actress told the site. “You couldn't then, and you can't now, so you're never alone. Your wealth and status become kind of like literal obstacles to you, because you're weighed down by this clothing, which means that you can't move; you can't go anywhere on your own. It would have been incredibly difficult to have any kind of personal freedom. I think that the costumes are always reminding you of that when you're wearing them as the actor…So, it's a useful kind of reminder of the life that they led.” 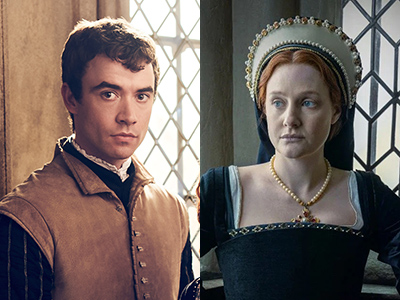 Blackley agreed. “I actually also had some scenes where I have to dress the king,” added the actor. “…There're stakes in that you're dressing the king to make him make him look good before he goes out, and in this dangerous world, if you do that wrong, then anything can happen.”

Before taking on their respective roles, the two were familiar with part of the story, but not this particular period. “I remember it being part of our curriculum,” Blackley toldSciFi Vision. “At school we were taught about this from a young age. So, it's definitely something that I was aware of, but less so this period of Elizabeth's life, which I think is what made it so exciting to be a part of, to explore this period of this awesome, complicated woman's life.”

“I was very familiar with the golden age of Elizabeth's life and Henry VIII,” added Garai, “but there is this period in the middle, this quite big, significant period, that I really just didn't know nearly as much as I thought I did… But I think that that's partly because this whole period of Edward’s reign and then Mary I’s reign is really not so much a feature of our kind of public imagination.”

For more from the two, including what parts of their characters they connected with, watch the full interview below, and check out Becoming Elizabeth, now streaming on Starz.