In tonight’s all-new episode of The Walking Dead, at the prison camp at the Commonwealth, the warden (Michael Weaver) threatens Negan (Jeffrey Dean Morgan) to get him to tell him who is trying to start a revolt among the prisoners. Not willing to give up Ezekiel (Khary Payton) and the others, Negan offers himself up to protect his wife, Annie (Medina Senghore). However, not wanting Negan to become a martyr, the warden grabs his wife and plans to shoot her as well. Thankfully, however, the other prisoners stand up to him as Daryl (Norman Reedus) sneaks in and stabs him in time.

Earlier in the week, Senghore spoke with SciFi Vision about her character and tonight’s episode. Read the full transcript below!

SCIFI VISION:  So, the first thing I want to talk about is for [tonight’s] episode in particular - and this is obviously my own opinion, but I would think in the apocalypse that somebody who's pregnant would be a little more important, because I would think the baby would be important. So, I'm just kind of curious, in your own opinion, do you think a lot of the reason maybe why she's being forced to do hard labor and all that, that it is more to do with Negan and him being a big player and them wanting to not let him do what he ends up trying to do anyway? 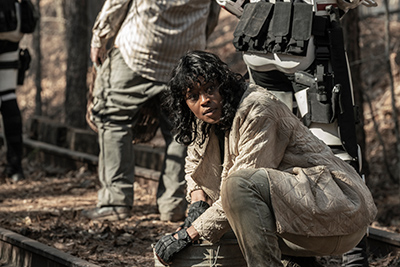 MEDINA SENGHORE:   I think that it goes to just kind of the savagery of how the Commonwealth operates. The people who they forced into these labor camps are disposable, like you see in [episode] 21; those three people who try to escape, and they just mow them down and then tell everyone else to get back to work. They won't let the prisoners use their names. So, yeah, that's a really great insight that you make that you would think at least there's some dispensation for preservation of life. But if you are considered a threat to their power structure, you're disposable.

I'm curious; do you think from the very beginning that the warden all long planned to kill both of them? Because I kind of felt like he got upset when he knew Negan wasn't upset that he was getting shot. It was more like, “If you want to be a martyr then I'm going to screw you over” type of thing. Did you feel like that? Because you see it from a different perspective, obviously, than I do as a viewer.

I think there are a lot of parallels. He's running an operation on a smaller scale than what Negan ran at the Sanctuary, but there's a lot of parallels about how he's operating everything and how Negan operated. He knows that the way you control a large group of people, the way you control a majority, with a minority, is one a threat of violence. Like, we have the guns, but also there has to be a sense of fear…You keep people in line through fear and intimidation and threat of violence. And when he puts Negan in front, you know, he could have shot Negan privately. The reason he does it in front of everyone is to teach everyone, “this is what happens when you don't fall in line.” But Negan takes it so bravely, and you see there's a moment that the warden realizes what's going on. He's like, “Oh, this could backfire on me.” I don't think he had any intention of including Annie, [until] he sees “Oh, this has to work to keep everyone in line, and if Negan dies a hero, I've got a big problem on my hands.” And it’s sick but, really, he's just doing his job.

That's kind of what I thought, that when Negan smirked, I think that's when it kind of clicked. So, I would think some of them may see her as, you know, just a pregnant woman or just Negan’s wife. Do you think they’re underestimating her? I think she has a lot more to her and that she would fight, and they just don't maybe see that…They maybe using her to get to Negan, but I just wonder if they're not kind of worrying about her in her own right.

I definitely think so. Annie’s not much of a talker. She's a very silent kind of introspective person, and I think people might mistake that for meekness or for someone who doesn't have a lot going on, but she has a really strong spiritual and philosophical core that that dictates her movement that you you really won't be aware of unless you're in an intimate relationship with her.

When I talked to you before, I think you had been in like, one episode, so you couldn't really talk about a lot of it, but you have had a lot more fights and action scenes since them. Do you enjoy that side of it? And do you find that easier or more difficult than the more emotional stuff?

I love any type of action. I'm very physical myself, and as an actor, I'm even more free when I have a lot of physical free rein. Also, I just love the technical challenge of fighting and weapons and, you know, dealing with terrain. So, personally, I love the action.

What about the the more emotional scenes? Do you have difficulty with that stuff? 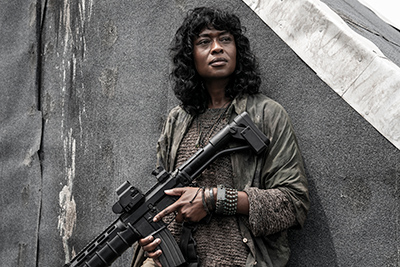 I love that stuff too. I’m a drama queen; I love the feels. Also, the writing on the show is so good. The writers know the characters so well that those scenes when you get down to, you know, the human side of all of this [it’s] great. Also, the action tends to be - you shoot it very piecemeal. It's like this and this and this. Then, when you relax, it's like, “Oh, I've got a scene that's two or three pages long.” That's really rewarding to do.

The other thing I wanted to ask is that you're at the Commonwealth, but you kind of haven't gotten in the nice cushy side and getting to dress nice. After a while, does that kind of get to that you're always covered in dirt and blood?

Yeah, it cuts it cuts both ways, because, as an actor, when you're in a costume, it's very delicate. When you're in between takes, it makes life a little bit harder, because it's like, “Okay, I have to sit very still. I have to go like this, so I don't get my costume sweaty,” you know, “I can't eat lunch” and all this stuff. So, being on a show where it's like the dirtier and sweatier I get, the better, I love that, just because I can relax like in between takes. I can lay on the ground, and I've done wardrobe a favor. So, I like it just because it helps me relax. I don't have to think about, you know, keeping myself [clean]. But, you know, for me, after I do a project like that, I tell my reps, I'm like, you know, “Can I play someone very fancy next?”

The last thing I wanted to ask you is how has playing a character in The Walking Dead changed your life? Because it's such a big franchise.

Well, on a personal level, every character you play leaves a little something with you. I mean, not for everybody, but for me it does. I really miss Annie’s quiet toughness. So, when I go back, and I watch the episodes, it's fun to kind of revisit the way she operates in the world. Because I'm a little more kind of anxious and, you know, angular, and she's just kind of steady and calm in a way that I am just not. So, it's changed me, and, you know, getting to spend some time in that space. But then just being a part of the franchise has introduced me to the wonderful, wonderful fandom. The fandom of this show is just incredible, and I appreciate people who enjoy fantasy and who embrace fantasy as a part of their workaday life. This fandom has it in spades. So, yeah, I love reading the Twitter comments and how people find the Easter eggs, like how they'll notice even shots that have been framed up similarly [to the comic]. So, that's been a fun new thing.
Twitter
BotonSocial por: SocialEmpresa
Category: Interviews