Recently, Netflix premiered the first half of the fourth and final season of its series Manifest. The series follows passengers of Flight 828 who returned from their flight to find five years had gone by. However, that was not all, as they each started having “callings,” or visions of future events. Some of the passengers also came to believe that there is a death date coming for them if they don’t use the visions to help others and change their future.

At the end of last season, Angelina (Holly Taylor), believing baby Eden Stone to be her angel and savior, killed Eden's mother and kidnapped the child. However, as misguided as she is, she seemed to truly care about Eden. “I think that Angelina is always coming from a place of genuinely thinking she's doing the right thing, and she does care about people a lot,” Taylor explained to SciFi Vision during a recent interview. “That's kind of the reason she's gotten into the messes that she has, because she cares so deeply. And then she doesn't feel like it's reciprocated, and she's so hurt that then she makes bad choices. So with Eden, she feels this amazing connection with her…[It] also was nice to show a more humane side of the character that's done these drastic things, and that you can have both. It doesn't justify the bad things that you've done, but it made it much more interesting for me to play, to show that she is human and caring and nurturing while she's doing these evil, insane things.” 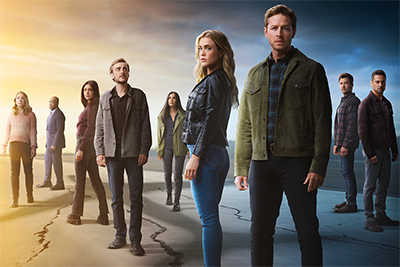 While much of the first part of the season focuses on the Stone family trying to find Angelina and get Eden back, a lot of it also deals with the mystery of the 828ers and the looming death date. Parveen Kaur, who plays Saanvi and was also part of the interview teased a bit about that storyline. “They find the black box,” the actress told the site. “I think that one's really exciting, just because it's physically linked to the plane. So, I hope the fans kind of look at that as a well of possible answers.”

Daryl Edwards, who plays Robert Vance will also help the 828ers again this season, even though it’s in a less official capacity. “Vance is working more on the periphery than he ever has before, and he is calling in an awful lot of favors to continue to help the passengers,” teased the actor.

For more, watch the full interview below. Manifest is currently available to stream on Netflix.