Kindred, which drops today on Hulu, is an adaptation of the novel of the same name by Octavia E. Butler. The series follows Dana James (Mallori Johnson), a young Black aspiring television writer who has moved to Los Angeles. However, after arriving in her new home, she is pulled back in time to the nineteenth century to a plantation that is linked to her and her family.

Branden Jacob-Jenkins, who serves as showrunner on the series, was a huge fan of the book. “I'm fanatically devoted to Butler and definitely this book,” he told SciFi Vision during a recent press day of interviews promoting the series. “I just wanted to see it…I wanted to watch the show, and that was really where it started. The more I worked on it, the more I kind of felt the necessity of it in this moment, and also just the necessity of drawing all the attention I can to Octavia Butler, because her vision was so profound, and her work so captivating and entertaining and inspiring. If anything, I just want to bring people back to her books.”

The series clearly deals with an important but difficult subject matter, which of course affected those filming it. “The scenes that really showed the brutality of what it meant to be an enslaved person in that time were probably some of the most difficult to film,” Johnson told the site. “The history was palpable. During the scenes I could really feel the presence of my ancestors there surrounding me. That was emotional for me, for sure.” 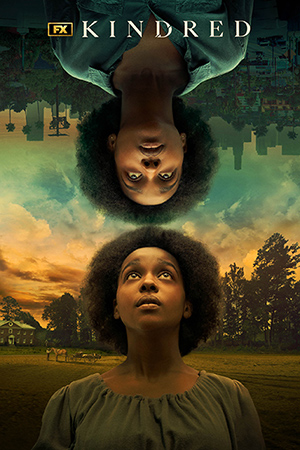 “For me, obviously, the more brutal aspects of the story are horrifying, but they're honest,” Micah Stock, who plays Kevin Franklin, Johnson’s husband, told the site, adding that there were times when he wanted Kevin to respond to things better than he did as a white man. “But the truth is, that's just not honest storytelling. Kevin is capable of many great things, but he's also limited in certain ways, whether it be because of his whiteness and the privilege that comes with that, or just because of the shock of this absolutely absurd and horrific situation that they're being put through. But yeah, I think, for me, that was the most difficult aspect in terms of the modulation of the piece.”

“I think that there are a lot of things that we had to film that paled in comparison to the real atrocities of slavery, that were super impactful,” said Sheria Irving, who plays Johnson’s mother. “Without giving too much away, I will say that there was a lot of grief; there was a lot of loss. There was a lot of violence and brutality. So, when filming any iteration of those things, it was really tough, and we had to call upon our ancestors to imbue us with the strength to do the work earnestly and honestly.”

“I think what Branden [Jacob-Jenkins], our incredible showrunner, is interested in is not only telling the story authentically in terms of the physical brutality, but also the emotional violence of slavery and some of those nuances,” added Austin Smith, who plays the slave Luke. “…There are ways in which slavery is an assault in ways that we don't normally think about or ways that aren't always depicted in these stories or depicted in textbooks. So, for those days, sometimes it was just the emotional toll and the emotional stamina that you really had to take care of, but what's so amazing about this cast and this group is we're so attentive to each other and so in tune with each other that we really just support each other and hold each other up during those moments.”

Sophina Brown, who plays the slave Sarah, agreed. “Everyone was on mission, and everyone felt as though this was a gift and an opportunity to serve,” she told the site.

On the other side of the coin, are the plantation owners in the past, Mr. and Mrs. Weylin, played by Ryan Kwanten and Gayle Rankin. “This is sort of not your atypical mustache twirling gentleman, plantation owner; this is sort of someone that fell into that position by proxy,” said Kwanten of his character Thomas, who can be brutal at times. “His late wife was sort of the one that yielded the power, and after she died, he kind of took over that power. I feel like he has more of an allegiance to the land, to the plantation itself, than to its inhabitants, including his family. So, he's a very myopic, narrow minded, ruthless, unruly, unpredictable type of a guy, but at the very core of it, I think he's just overly prideful, and that makes him such a sad, sad character that we can kind of chip away at over the course of this season and hopefully many more.”

“I think Margaret kind of embodies insecurity in a kind of profound way,” said Rankin of Margaret, which was part of what she connected to with the character. “I guess the easiest thing to connect to with Margaret was, [how] I think we can all kind of as human beings understand the humanity of insecurity…Other than that, everything else was much more challenging to kind of access…There're so many aspects of Margaret, the abominable behavior, her morality, the way she treats people, that's not certainly something I can relate to.”

For more from the cast and showrunner, watch the full interviews below, and be sure to check out season one of Kindred, now available in its entirety to stream on Hulu.