Book Review: The Art of AMC's The Walking Dead Universe

The Art of AMC's The Walking Dead Universe was recently released everywhere books are sold. The 240-page hardcover, which comes from AMC Networks, Skybound Entertainment, and Image Comics, covers all three series in The Walking Dead Universe. The book gives readers a behind-the-scenes look at the making of the three series through concept sketches and other art and illustrations, storyboards, photographs, and more. It includes an introduction by Chief Content Officer of TWD Universe Scott M. Gimple as well as other fun facts.

The book is full of so much to look at and presented beautifully. Each part also provides some interesting insight into the making of the series in general or whatever that specific page is about. It’s full of tons of content that fans of the series will love.

The book is full of positives. I only really found there to be two negatives to the book. The first is that I wish the book were divided up in a different way, preferably by series. All three shows are together, and I couldn’t really find a rhyme or reason to how they were ordered. 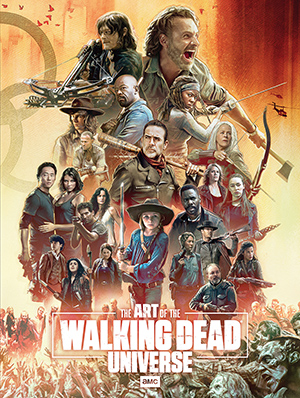 The second, and this isn’t really surprising, but the book focuses on all three series, but much more attention I felt was paid to the flagship show than Fear the Walking Dead and The Walking Dead: World Beyond. Granted, to really have enough satisfying content for all three shows, there would probably have to be three separate books. Still, as much as I appreciated what was included, there were certain things I really think should have been in there. For example, where there are costumes and props, it shows those for a few of the main characters on the original series, but with such a large ensemble cast it really is only a small portion. However, there is nothing for the other shows except for Alicia’s one weapon on Fear and a bit on the clothing of the CRM and the Campus Colony and one weapon for World Beyond. The same is true with the locations. There are a bunch of the various places from the original series, but only the Abigail and the M.R.A.P. are highlighted from Fear, and the plane crash for World Beyond. I understand it would be impossible to include all of it, I just maybe would have divvied it up a bit different. As delightful as the full-spread color photos and artwork is, if they used smaller photos, they could have fit a lot more.

I wanted to give a detailed review of what you will find in the book, so I’ve outlined each section below. I’ve also tried to mention the main specific things there are for the spinoffs in particular, since there aren’t that many:

Developing the Dead - This section is about the artistry of the series and is kind of a hodgepodge. There are concept sketches and other art, storyboards, photos from the opening title sequences, and a lot of behind-the scenes photographs.

Some examples of what you will find in this section:
- walker concept art
- walker decomposition study
- storyboards for Rick riding into Atlanta
- a comparison of the opening title sequence for season one and season nine of TWD and some cool insights into the logo changes
- Fear and World Beyond intro credits
- concept art and storyboards for the “bicycle girl” walker
- mostly unused storyboards from “the melting face man” for World Beyond that was cut

Recurring Nightmares – This section deals with costumes and character accessories including various props and weapons, as well as the main places and vehicles in the shows, both sets and on location, including concept art and sometimes blueprints.

- Characters highlighted include for TWD: Rick, Daryl, Carol, Merle, Negan, Michonne, and Alpha/Beta, for Fear: Alicia, and for World Beyond: various C.R.M and campus colony costumes and S-Poles

- Locations/vehicles highlighted include for TWD: the prison, Hershel’s barn, Alexandria, Terminus, the Heaps, the Kingdom, Oceanside, and Hilltop, for Fear: the Abigail and the M.R.A.P, and for World Beyond: the airplane crash 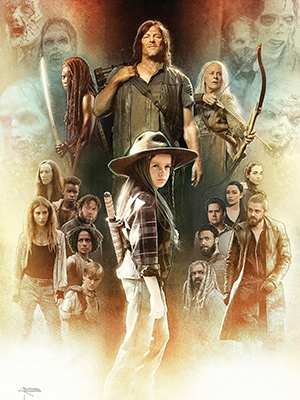 Sign of the (End) Times – This section is for writing used in the show, from printed signs to words scrawled in blood and more. Also highlighted is Iris’s art used in World Beyond that was created by Melissa Duffy.

Marketing for the Departed – This section is all about the advertising for the series including key art and posters. Many of them include both the concepts and the finished versions, and some include the photos without the wordage. For TWD: seasons one through ten, for Fear: seasons one through six, and for World Beyond: season one.

Biographies – This one is all about the crew.

Index – This index is more credits than index. Knowing who created certain pieces doesn’t help you find what you are looking for.

There’s no denying the book isn’t cheap, but it’s worth it. It is quite comprehensive, at least for the main series. Regardless, fans will love it and even just those who enjoy reading about how the look of a show is made should find quite a lot to fill their time with. The standard hard-cover edition with cover art by Brian Rood is gorgeous, as is all the art inside, and for the super fan there are even two additional variant covers available, including the AMC exclusive with cover art by Yanick Paquette and Nathan Fairbairn, and the super rare Skybound store exclusive with Daryl Dixon cover art by David Finch and Dave McCaig. I definitely recommend you pick up the book, regardless of which version you choose.