Blu-ray Review: Snowpiercer: The Complete Second Season is Dark, Gritty, & Not to be Missed

Published: Saturday, 20 November 2021 12:53 | Written by Jamie Ruby
***Warner Bros. Home Entertainment provided me with a free blu-ray copy to review. Opinions are my own.***

Based on the graphic novel series and film from Bong Joon Ho, Snowpiercer is set in the not-so-distant future after the world has been frozen over. What’s left of humanity is aboard the perpetually moving train that is over ten miles long and, originally, over one thousand cars.

At the end of the first season of the series, the train passengers became aware that the train was not being led by Mr. Wilford (Sean Bean) as they had thought, but rather by Melanie Cavill (Jennifer Connelly), pretending to give orders as the man. There was a revolt, and the Tailies took over with Andre Layton (Daveed Diggs) emerging as the leader of the merged classes.

However, when a rival train called Big Alice appears and attaches to the tail of Snowpiercer and it’s revealed that Mr. Wilford is, in fact, alive, Melanie risks going outside the train in the deadly weather to stop him from taking Snowpiercer. It’s also revealed to those on the train that Melanie’s daughter, Alex (Rowan Blanchard), who she thought dead, is Wilford’s protege.

Season two hits the ground running, as Melanie remains outside, unaware that her daughter is alive. Meanwhile, Wilford threatens to uncouple from Snowpiercer and leave everyone to die if his demands are not met. Now, essentially one train, with Big Alice having parts Snowpiercer needs, and Snowpiercer having fresh food needed by Big Alice’s crew, both sides will have to work together to stay alive, but neither Wilford nor Layton is willing to bend. 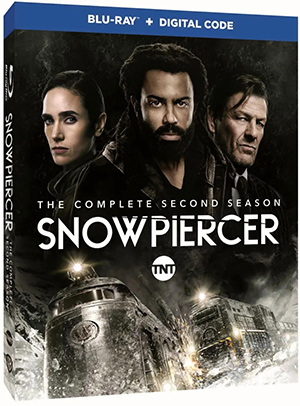 As the season moves on, the train becomes divided again with many loyal to Mr. Wilford, often unaware of the atrocities he’s perpetrated in his quest to get Snowpiercer back and what will happen if he gets full control. Meanwhile, Melanie makes a shocking discovery that could change the future of humanity. Could the earth be beginning to thaw?

I found the second season to be just as compelling as the first. Season two felt to me like it had a bit more of an overarching story as compared to season one, because the season was mostly about the division between the two sides and there wasn’t the same murder mystery case of the first season. The interpersonal relationships as well as the exploration of a class system is still interesting to watch unfold. The season also introduces some new fascinating aspects such as the experimentation going on to withstand the cold. Although a separate storyline, I did also appreciate Melanie’s struggle to survive as well as the game changing information she found.

The performers on the series are always phenomenal. I enjoyed watching Connelly’s Melanie and Diggs’ Layton joining forces against Mr. Wilford. I was also happy to get to find out more about why Melanie left her daughter and joined Snowpiercer. Bean was well cast as the psychopathic and creepy Mr. Wilford. Another standout of the season to me was Allison Wright as Ruth.

The sets are always so detailed and add so well to the atmosphere. The special effects of the series continue to be fantastic for the most part. Some of the exterior shots of the frozen earth are not as realistic.

All in all, I was pleased with the season. It was fast-paced and kept me entertained while also making me examine my feelings towards characters, because there is always a lot of morality at play in the series.

There are not very many bonus features in this set, and those that there are short and seem more like promotional material than true special features. Although you get to hear very briefly from cast members about the new characters in the season, since it’s a large ensemble, you don’t even get much of that, and it doesn’t really add anything at all about making the series. Worse, there is even some repeat within the small amount that is available.

The disc set does contain a digital code for the season, but the digital version only includes the ten episodes and no special features.

The Great Engineer: Bringing the Mysterious Mr. Wilford Aboard [7:36] - Cast members talk about Mr. Wilford and how his arrival upsets the peace on the train, as well as working with Bean. The featurette includes both interviews and behind-the-scenes footage. Interviews include Diggs, Connelly, Bean, Steven Ogg (Pike), Lena Hall (Miss Audrey), and Iddo Goldberg (Bennett Knox).

Season 2 Overview [3:37] - This featurette has short interview clips with the cast as well as a bit of behind-the-scenes talking about Wilford and how the characters feel about him as well as well as other bits about the season. Featured are Diggs, Connelly, Bean, Mickey Sumner (Bess Till), Rowan Blanchard, Iddo Goldberg, Steven Ogg, and Alison Wright.

Season 2 Roundtable [3:59] - Cast members Diggs, Ogg, Wright, Hall, and Sumner, along with showrunner Graeme Manson, sit around a table on set and talk while both clips and promotional photos are shown.  Manson talks about knowing early on they wanted to bring Mr. Wilford in at the end of the first season. The cast and Manson talk about the power struggle between Leyton and Wilford, some character reactions to Mr. Wilford, Alex’s arrival, and how the show is current and relevant because it’s political. Sumner also talks briefly about playing Till’s PTSD.

Daveed Diggs Season 1 Recap [3:40] - A recap of season one narrated by Diggs

I recommend that you watch season one before starting the second season if you haven’t seen it. Although you would understand the story, you would miss the dynamics in the characters’ relationships, which is as a big part of the show as are the futuristic aspects. If you liked the first season you should also enjoy the second. The series is one I definitely recommend, however, if you have already seen the season, unless you want to rewatch moments, there isn’t really a need to buy the set, as the bonus features are subpar. Regardless, season two of Snowpiercer is exciting and gritty and not to be missed.
Twitter
BotonSocial por: SocialEmpresa
Category: DVD Reviews