Today the BBC One series, Chloe, comes to Prime Video. The series follows Becky Green, played by Erin Doherty, who has become obsessed with stalking Chloe (Poppy Gilbert), her childhood friend on social media, who’s life in high society she thinks is perfect. When Chloe suddenly turns up dead after trying to contact Becky for the first time in years, Becky creates a new identity, Sasha, and insinuates herself into the lives of Chloe’s friends to find out the truth.

Although Doherty essentially plays two characters, the actress always approached it as different parts of Becky. “When we were shooting,” Doherty told SciFi Vision, “[people] were like, ‘Oh, this is a Becky day, or this is a Sasha day.’ For me, I never quite understood that, because I think what I found so fascinating about the story and the character was that this is all happening within one human being. All these things are possible and are made possible by this one person, and I think I didn't separate it. I found that to be the most exciting aspect of [her]. I think I find that the most exciting aspect of most people, why we switch and flip and how we have these infinite potentials within us. And I think Becky surprises herself. 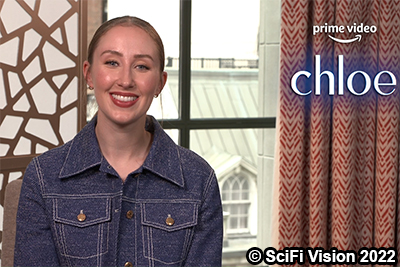 “That's kind of what I latched on to, whilst playing Sasha, just that element of surprise and complete surrender to whatever may fall out of her mouth. I think Becky has no idea what's going to come out, and that's part of the thrill. Yeah, like I said, I always had to approach it from Becky's lens, though.”

Doing that likely helped Doherty keep it straight. “I don't remember having any difficulty struggling to understand my point of view,” said the actress. “I think there were definite days when we were chopping and changing, and I was just completely perplexed by what I just done, but I think, in the bigger picture, I always felt connected to Becky, which made me feel connected to Sasha.”

For more from the star, including where she thinks Becky may be heading in the future, watch the full interview below and check out the series, now available to stream on Prime Video.