The new series, The Calling, premieres today on Peacock. The series, which comes from creator David E. Kelley, was adapted from the Avraham Avraham novels by D.A. Mishani and follows NYPD Detective Avraham Avraham (Jeff Wilbusch) who is guided by his spirituality and has a way of connecting with others that allows him to see things that others may miss.

Although the series is an adaptation, there were certain things that had to be changed, according to Tinker, such as placing the series in Brooklyn. “[T]here's the saying of write what you know,” the producer told SciFi Vision. “So, the books take place in Tel Aviv. That's not a place I've lived; it’s not a place David [Kelley]'s lived. I think to tell this as authentically as possible, we found an actor who was very much Avraham and could authentically portray Avraham in Jeff, but in setting it, we needed to be able to write about a place that we were familiar with…We have tons of different perspectives and voices on the show in the writers room and the producers and the various directors we've had that it should feel like a melting pot of perspectives and voices, but at the end of the day, to kick things off, both David and I looked at Brooklyn and felt like this is the place where we can tell this story authentically and efficiently.” 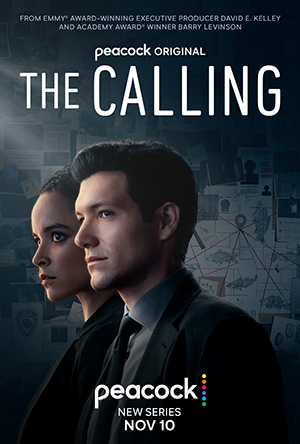 At the start of the show, Avraham is assigned a new partner, Janine Harris (Juliana Canfield), even though he wants to work alone. “This is a partnership that Avi never planned to have,” Wilbusch told SciFi Vision. “He works alone and thinks this is the best that he needs to concentrate and to do his thing. Then detective Janine Harris, played by by Juliana Canfield, wants to work with him and he refuses, but she in her special way just surprises him and inspires him. I think she brings so much to Avi that Avi never knew that he needed, but he definitely needed it. This relationship evolves and becomes such a such a strong relationship and makes them both better [people] and better detectives.”

According to Canfield, they complement each other. “Avi is a master observer,” she told the site, “but as with anyone, he has a blind spot, and very often that blind spot is himself. And Janine is like there to report back what he's giving off into the world, and, similarly, I think she always has her eyes open and is trying to learn [and] improve her detective skills, get ahead. And Avi really sees her for who she is too. So, they sort of provide this beautiful mirror for each other. They show each other their strengths and their weaknesses. Then, they combine forces, and I think, together, by the end of this, by the end of the season, I think they've kind of figured out how the dance between them should work, and they're kind of unstoppable together.”

Karen Robinson plays the part of Captain Kathleen Davies, their boss who throws them together. Although Avraham is unconventional in his approaches, she lets him work the way he wants, because at the end of the day, he closes cases. “His approach, as inscrutable and unorthodox and maddening as it is,” explained the actress, “actually produces results, even when he goes wrong and has to correct with the help of the people around him. I think that [she has] known Avi for so long, that [she knows] the chances are that if everything isn't going to get laid bare, it's at least going to lead us somewhere. So, I think you give someone like that a lot of rope. But as Captain Davies, I also have to keep him coloring within the lines to a certain extent, and that's a challenge.”

Michael Mosley’s character, Detective Earl Malzone, generally doesn’t question the way Avraham works either. “I think Earl leads with his emotions sometimes, and Avi is so good in that interrogation room about just being a surgeon about his words and how he pulls these people's deeper truths to the front,” Moseley told SciFi Vision. “So, I think Earl is fascinated by Avi’s meticulousness, because Earl’s just a little clumsier than that.”

For more from the cast and producer, watch the full interviews below, and be sure to tune into The Calling, now streaming on Peacock.