This new season of Mythic Quest promises to be one for the books. Premiering today on Apple TV +, fans can expect to see lots of different pairings forming, all of which will have an impact on the season as a whole.

“There are so many fun pairings in this season in particular,” Ashly Burch revealed. “Jesse [Ennis] and I and Charlotte, who plays Poppy, have a really fun storyline that I'm excited for people to see where we go to brunch.”

Naomi Ekperigin and Danny Pudi agree when it comes to their own characters of Carol and Brad. “Season three of Mythical Quest is wild,” Ekperigin told SciFi Vision “Characters are forming new alliances. Somehow Carol decides to hang out with Brad, which she should never do.”

While the season was fun for the cast, filming still came with some challenges. “The biggest challenge was kind of a weird challenge that we just put on ourselves, because we started shooting things really quickly,” Ennis said. “We know our characters. We know the tone of the show; we know how we shoot the show. So, what would usually take seven days started to take three or four days, and then it was almost like we wanted to beat our record. So, it wasn't like anyone was sitting in the corner being like, ‘Guys we have to make our day so that we shoot a three-day episode,’ but…there was just this momentum and this rhythm with which we were shooting that was really fun, and challenging and we got ahead of ourselves.” 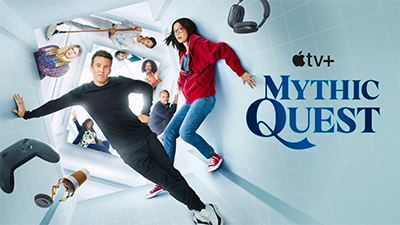 Another thing fans can look forward to seeing is the growth of the characters…or lack thereof. “I'm really looking forward to how much these characters have really grown, but also [regressed],” said Imani Hakim. “We have so many new pairings and everyone has sort of been uprooted in a way. We're all in new positions and jobs.”

Charlotte Nicado echoed this sentiment when it came to her own character of Poppy.  “I think that this season, she's really struggling with how to build something that she cares about how to be the boss, and also, how to maintain humanity,” she said.

David Hornsby also agreed that there is a lot of growth happening with the characters. “Like any show, you get to know your characters more and more.”

For more, watch the full interviews below and tune in to Mythic Quest, now streaming on Apple TV+.